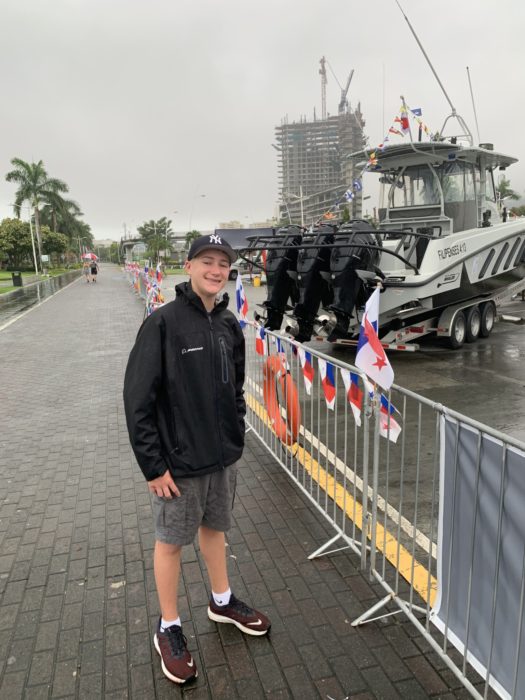 While most were home enjoying the four-day veterans weekend, I traveled to Panama with my grandfather, Dave Stein. Panama is most famous for the fifty-mile canal that connects the Pacific and Atlantic oceans.

The Panama Canal is a shipping lane cut through the middle of the country.  The canal consists of three sets of locks along the Pacific side of the canal. These are known as the Miraflores locks.  The locks are about a half-hour drive from Panama City.

Both ends of the canal have two separated lanes, like a divided highway, so boats can go in opposite directions without risk of collision.  The boat that we boarded, through a tour, was a smaller passenger vessel.

The tour guide explained that it held about 300 passengers and was only about 100 feet long. This meant that our boat could be paired up with a larger boat while both still fit within the large locks.

For each set of locks, we were assigned a larger boat that followed us in and exited behind us after the water elevation was adjusted.

The boat ahead of us was the Malta-based “Isola Celeste.” We ended up overrunning that “Isola Celeste” while crossing Lake Gatun, a water body between the canals and the coastlines. This deepened lake was purposely dredged during the creation of the canal in the early 1900s, and provides a navigable stretch of water and so longer canals did not need to be built.

Small man-made islands  scattered in the lake contained large white billboards with black crosses (like plus signs) in the middle. Our tour guide explained that those are to help the canal pilots keep a safe distance from the islands and the shallower waters. 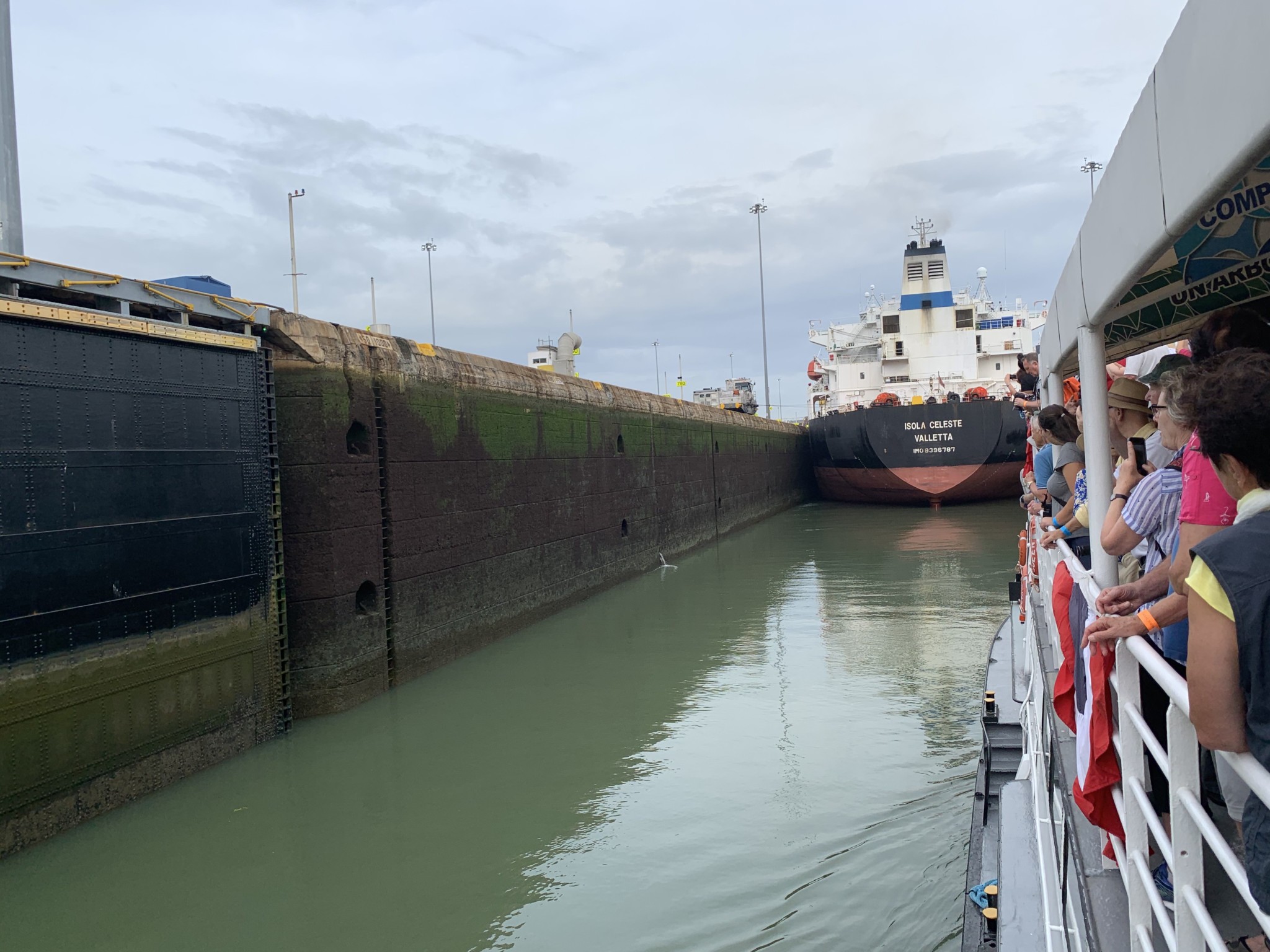 Using the lock system to change water elevations, the lake was created at the highest point of the canal, a full eighty-five feet above sea level.

Travel through the canal takes an average of ten hours. We were not on the boat for that long as it had been a relatively slow day at the canal, and our boat could move much faster than the other, larger boats following us.

Because the canal is so crucial for the world’s economy, it must stay open to keep the flow an traffic of boats continuing.

The only thing separating the lake from the ocean were the second set of locks, the Gatun locks. 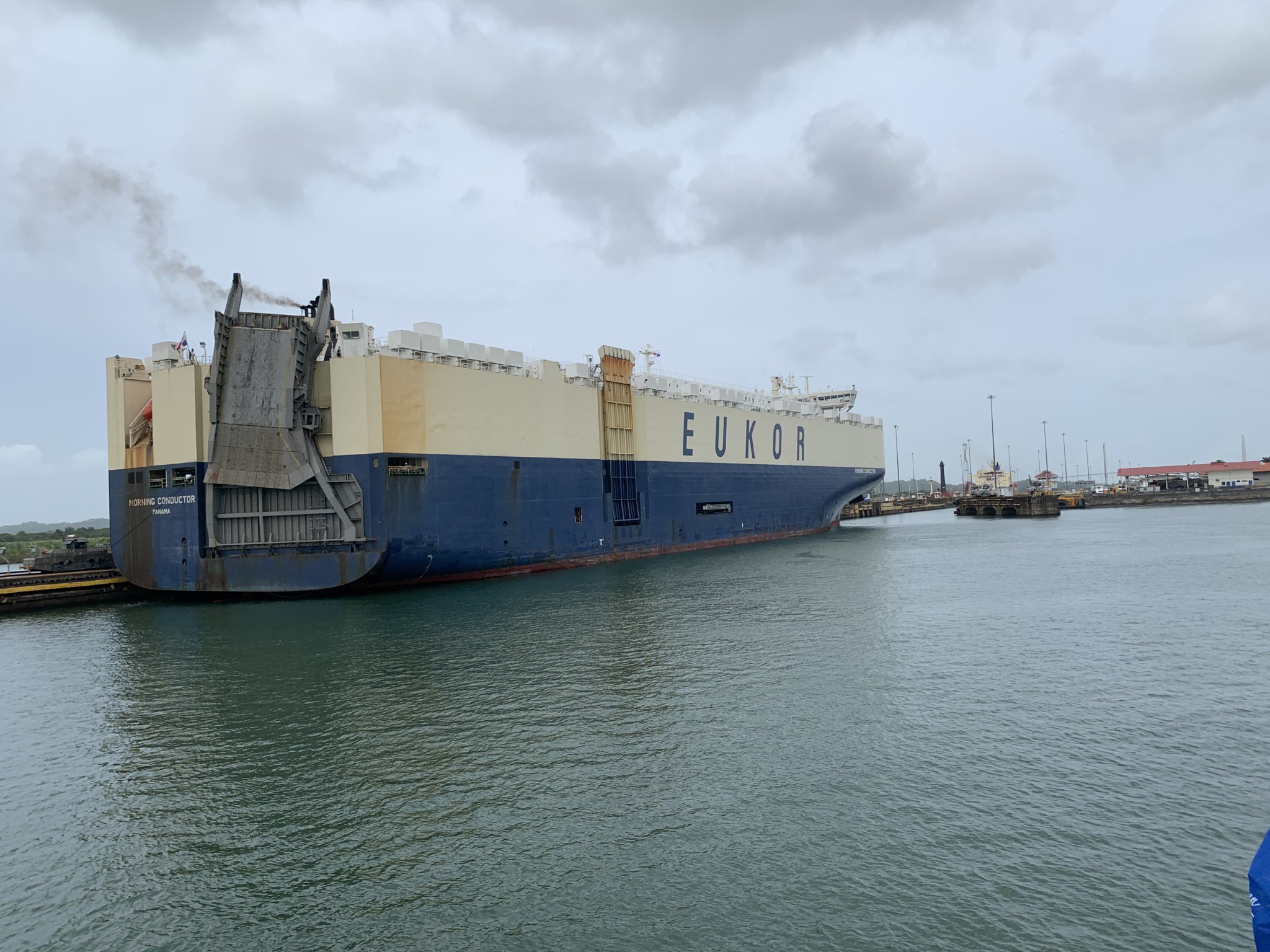 Our boat’s new partner, the “Eukor Morning Conductor” was registered in Panama. As a car carrier, the boat was massive as it pulled in behind us and dwarfed the size of our tour boat.  It followed us down the “lock ladder” as we made our way to the Atlantic Ocean and under the Atlantic bridge into open water.

Panama’s capital, Panama City, lies on the southern side, along the Pacific Ocean. The city is home to about half of Panama’s four million residents. As our taxi driver explained to us, the downtown was home to two central districts.

Old Town, where most of the buildings date back hundreds of years, reflecting its heritage of the Spanish Conquistadors taking control of the then small village in the early 1500s, is divided by extremely narrow one-way streets dating back hundreds of years. Old Town is home to most of the tourist attractions within the city, including the residence of Panama’s President. The commercial buildings here are occupied by local restaurants and small souvenir shops.

The second district within Panama City has no specific name, but is home to most of the nation’s government buildings and is the more modern parts of the city. Large skyrise buildings lined the bustling streets, which have a more American feel. This was where most of the business was done in the city, and also where our hotel was located. 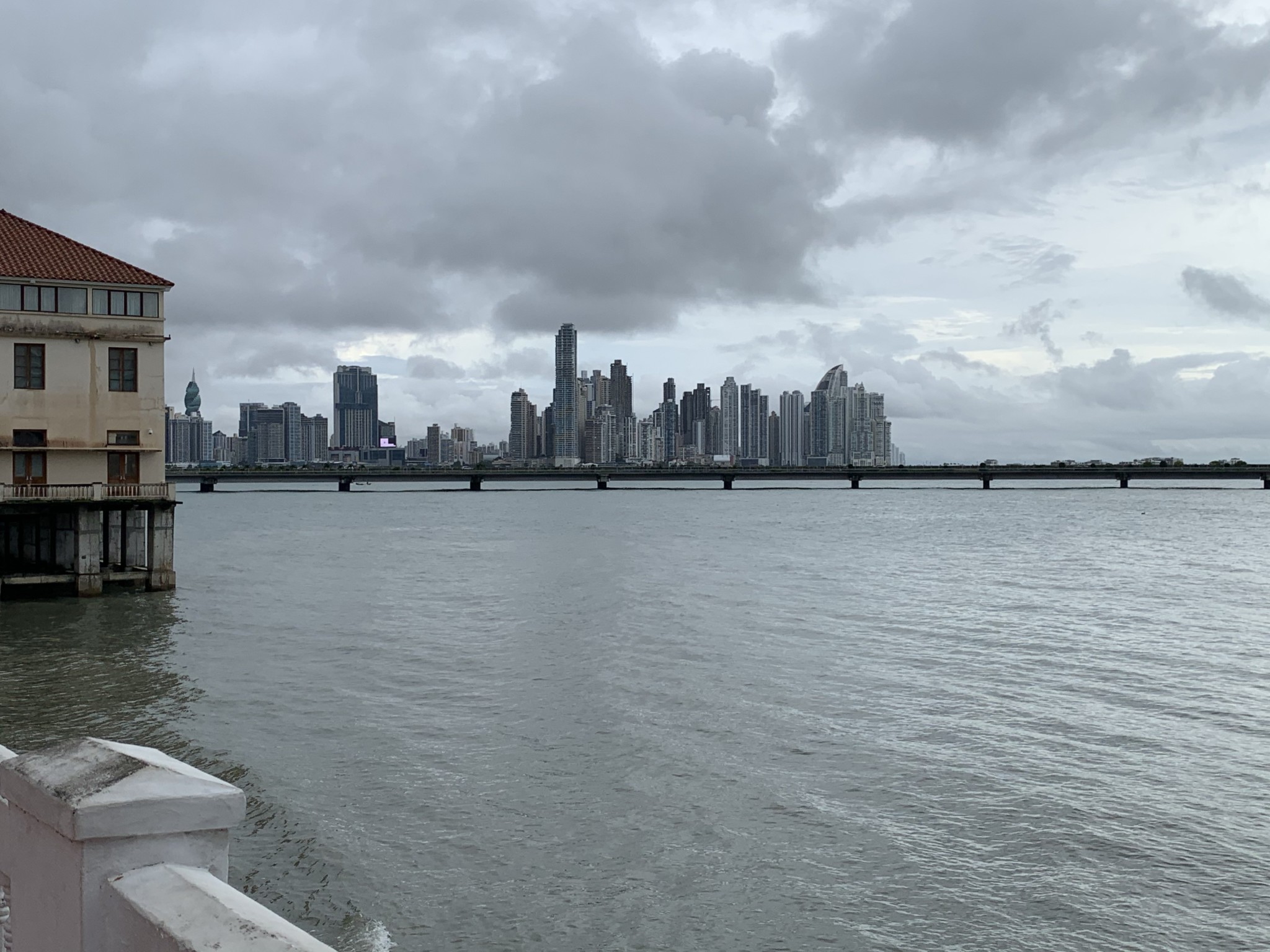 The business district runs parallel to Balboa Avenue and is separated from the ocean by a wide, grass-filled walking path. This stretch includes large playgrounds and parks and was filled with children and tourists on the rainy morning on which we walked the pathway.

Overall, the walkable city has a smell of fish from its marine industry trade and of ocean salt air.  Raw and prepared seafood is sold at the Japanese-Panamanian fish market, a popular tourist location. An elevated highway runs straight through the city, above large boulevards and residential districts spread beneath it.

The highway snakes through the sky rises and has ramps running up and down as cars enter and exit from the city streets below.  The highway noise was noticeable from the marketplace, which made it hard to hear others and difficult focus on crossing stoplight-less intersections along the local streets.

Taxi drivers in Panama do not stop for crossing pedestrians, especially when they are carrying passengers in the back seat. We had a number of close calls!

During our visit, our touring was interrupted by a torrential downpour that drenched the city. The proximity to the ocean makes these rainstorms unpredictable and our traveling during the rainy season, March-November, didn’t help our case. The country also didn’t have a reliable weather radar, which made it even harder to plan our day.

When the rain stopped, however, we visited the Old Town once again, this time taking a self-guided tour of the historic village.

Overall, our trip to Panama was interesting, exciting and different.  I would definitely recommend it to anyone thinking about experiencing something new. While the canal is one of the seven modern wonders of the world, it is definitely not the only thing to do in Panama. Panama City has new, modernized areas with pieces of its rich history showing everywhere. Sharing the experience with my grandfather made the experience even that much better!