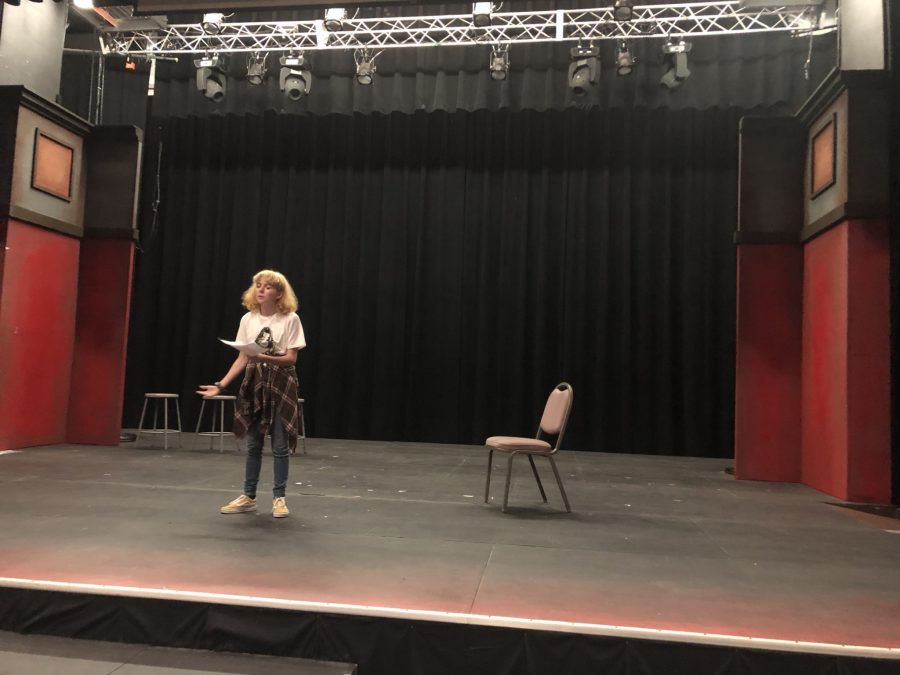 Senior One Acts will be performed in the auditorium by members of the Concord High School Drama Club Nov. 7, 8 and 9 from 7-9 p.m.
Tickets cost $9 each and can be purchased at the door.
The show will consist of four one-act plays: Beyond Us, directed by Myles Luongo; Selfie, directed by Lauren Sawyer and Krizia Vasquez; Oh What a Tangled Web, directed by Paige Annis; and Figure, directed by Kayla Pelligrini.
Money made at the doors goes to support the CRTC Theater & Film program to help cover equipment, music rights and costumes.
Junior Keisha Johnson, as manager for Beyond Us, stores all the scene directions and notes for the play. “I’m basically a memo.”
“We have a really dedicated cast and they don’t really need help,” she said, “but they’re really good at communication when they do need help.”
Seniors who want to participate in this annual event submit applications to longtime CHS director Clint Klose, an instructor with CRTC. Seniors can choose to direct an existing play or write one of their own.
Auditions took place Sept. 10. Being on stage is “nerve wracking but it’s a nice feeling of adrenaline,” said Ryley Nash, a sophomore who delivered the lines of somebody who calls in sick to work.
Nash was cast as Chris in Oh What a Tangled Web. Other actors in that production include Emma Hall as Jan, Jacob Orlen as Frank, Bailey Kirn as Shirley,  Zakary Walter as Mr. Quigley, Danielle Roberge as Mrs. Quigley, and Caleb Anderson as Tim Scarlota.