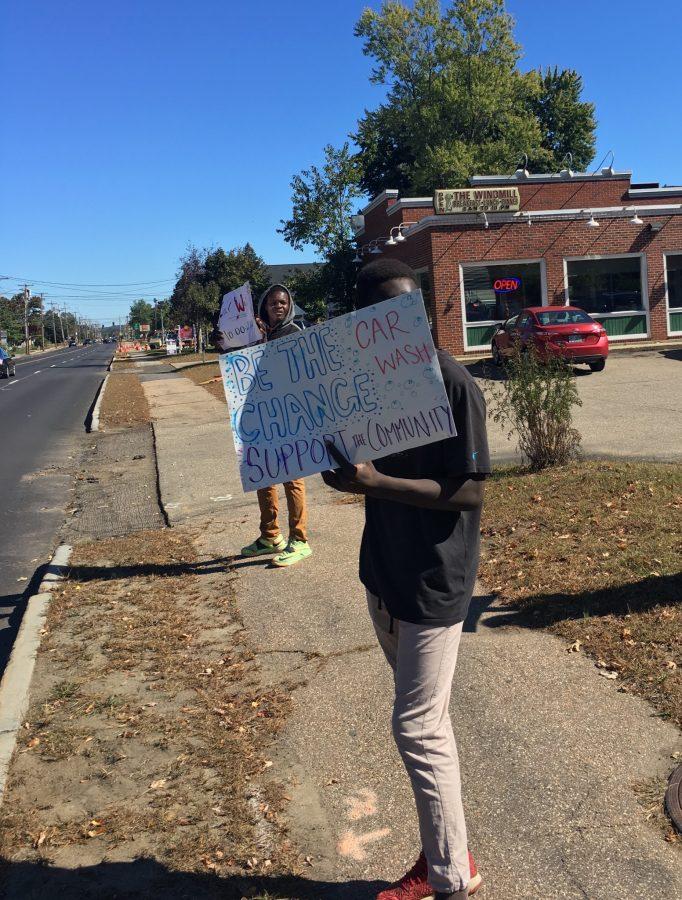 On Sunday, Oct 1, Concord High School’s Be the Change Club hosted a car wash at Arnie’s Restaurant on Loudon Road in Concord.
This car wash was intended to raise money for various school and community events that Be the Change hosts throughout the school year.
Be the Change is a multicultural club aimed at promoting awareness and acceptance of the many diverse cultures of students at CHS.
Club activities provide a safe space where people of all different backgrounds come together.
Be the Change holds a number of fundraisers, such as the car wash, in order to raise money for events it puts on.
The club hosts one event per month. All revolve around community and learning about other cultures.
One upcoming event is a party to celebrate the Nepali holiday of Diwali. The party will be held sometime in early November.
Be the Club members who participated in the recent car wash at Arnie’s included Abbas Abdulrahman, who lived in Sudan until age 13 before coming to America, and Exauce Masakarhe, who lived in Congo until age 12 before moving to the the states.
Abdulrahman and Masakarhe were among those who stood on the side of Loudon Road holding signs to attract people to the car wash, which ran from 10 a.m.-2 p.m.
The cost was $10 per car but individuals often gave more as donations. 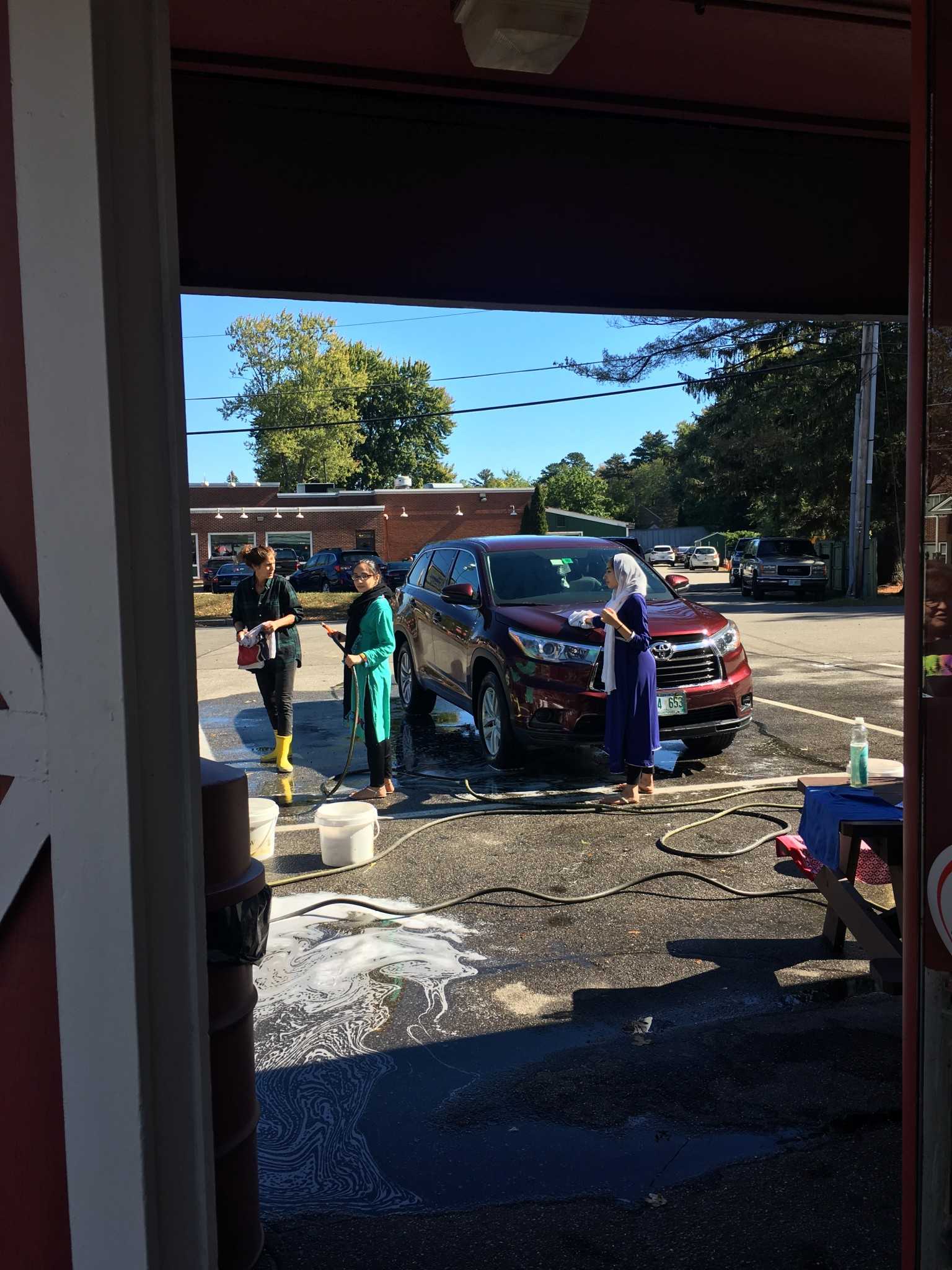 Arnie’s Restaurant is one of the more popular places for ice cream in Concord and often allows local organizations and groups to host carwashes as fundraisers.
In the photo at left, Sana Khan, Saeeda Khan and club advisor Anna-Marie DiPasquale got ready to wash one of the first cars of the day.
More than 10 student club members volunteered to help and were just as excited to work together — and occasionally have some fun spraying each other with the hose! — as they were to raise money for the club.
More than 25 people came to get their cars washed. Some planned to support the club but others merely saw the signs and wanted to get their cars cleaned.
This gave students the chance to share the club’s mission with those people who hadn’t heard of Be the Change before. 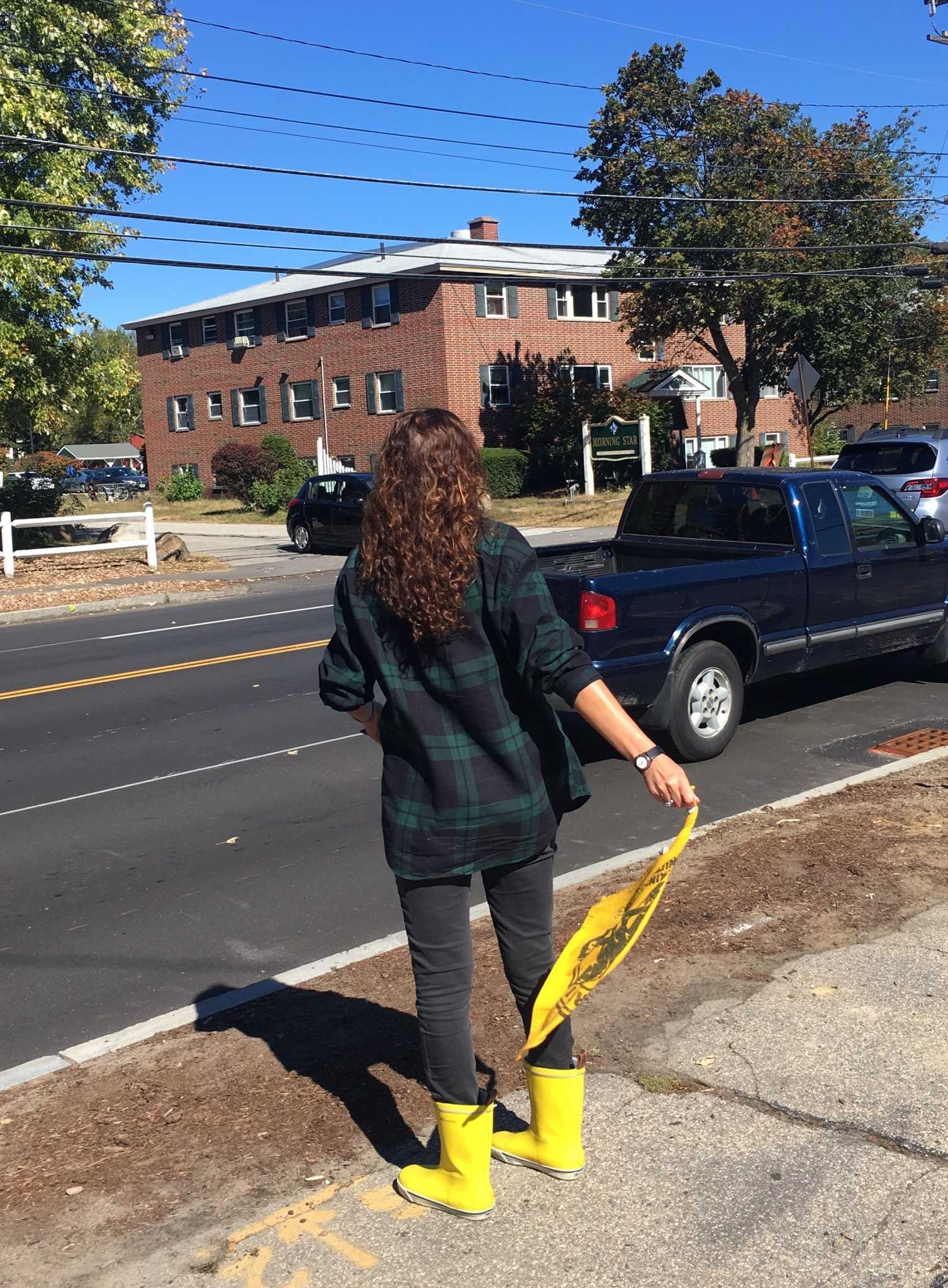 DiPasquale, or Ms. D, as students call her, used her infinite energy and enthusiasm to flag down cars for a wash by jumping and waving a towel in the air and sometimes calling out, cheerfully, “Come get your car washed. Look how dirty it is!”
DiPasquale has been the advisor of Be the Change Club since it first began at Concord High in 2011.
For DiPasquale, events such as the car wash where she sees students from all different backgrounds working together is one of the best parts about advising the club.
“It is absolutely my favorite thing to do!” she said.
DiPasquale started the club in 2011. The first activity was simply having lunch together in the Professional Library at Concord High every Thursday as a way for students to meet new people and learn about diversity within the school.
“It has evolved,” DiPasquale said.
Now Be the Change still hosts lunches every Thursday, to which anyone is welcome, but it also holds meetings every Friday and officer meetings every Wednesday in addition to a plethora of events. 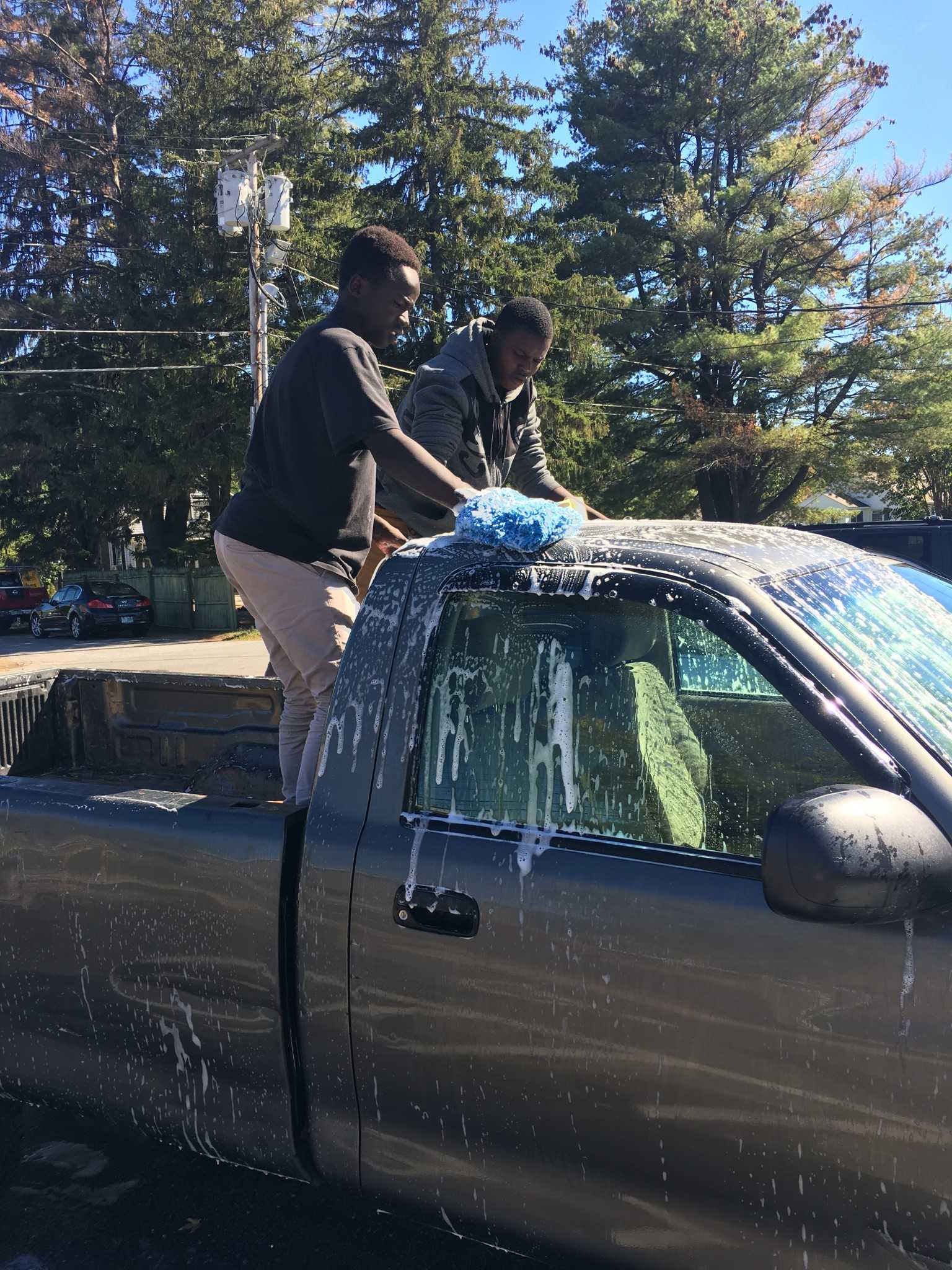 in the photo at left, Abdulrahman and Masakarhe jumped in the back of a truck in order to clean it as thoroughly as possible.
The two boys in this photo, as well as all the other club members helping at the carwash, worked diligently to ensure that each person left with a spotless car in return for their support of the club.
One woman who stopped by the car wash, Frances Gunnison, said that she was motivated to come because she “really wanted to support this group.”
Gunnison began a practicum at Concord High in the ELL department and notes the importance of organizations such as Be the Change club in both the Concord High and general Concord community. 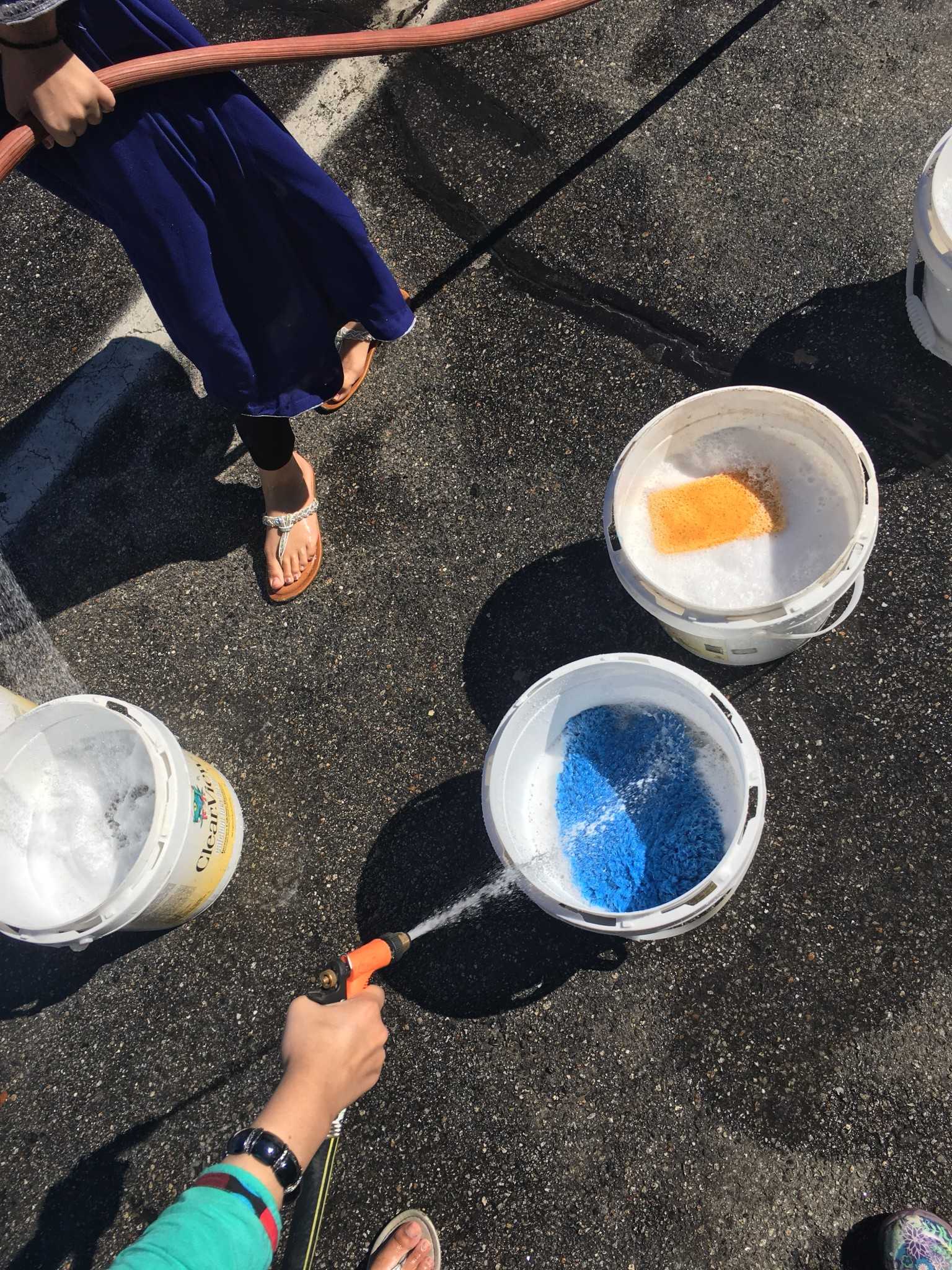 Sana Khan and Saeeda Khan, both of whom were born in Pakistan, prepped buckets of soapy water and sponges for cleaning with.
Club member volunteers rotated between cleaning cars and holding signs by the road to get people to stop.
By the end of the day more than 20 cars had been washed. This gave the club not only money but opportunities for students to talk to many people about the club and express their gratitude for the support.
Sana Khan, who is co-president of Be the Change Club, said she was motivated to take a leadership role because of the community, support, and fun that the club provides. 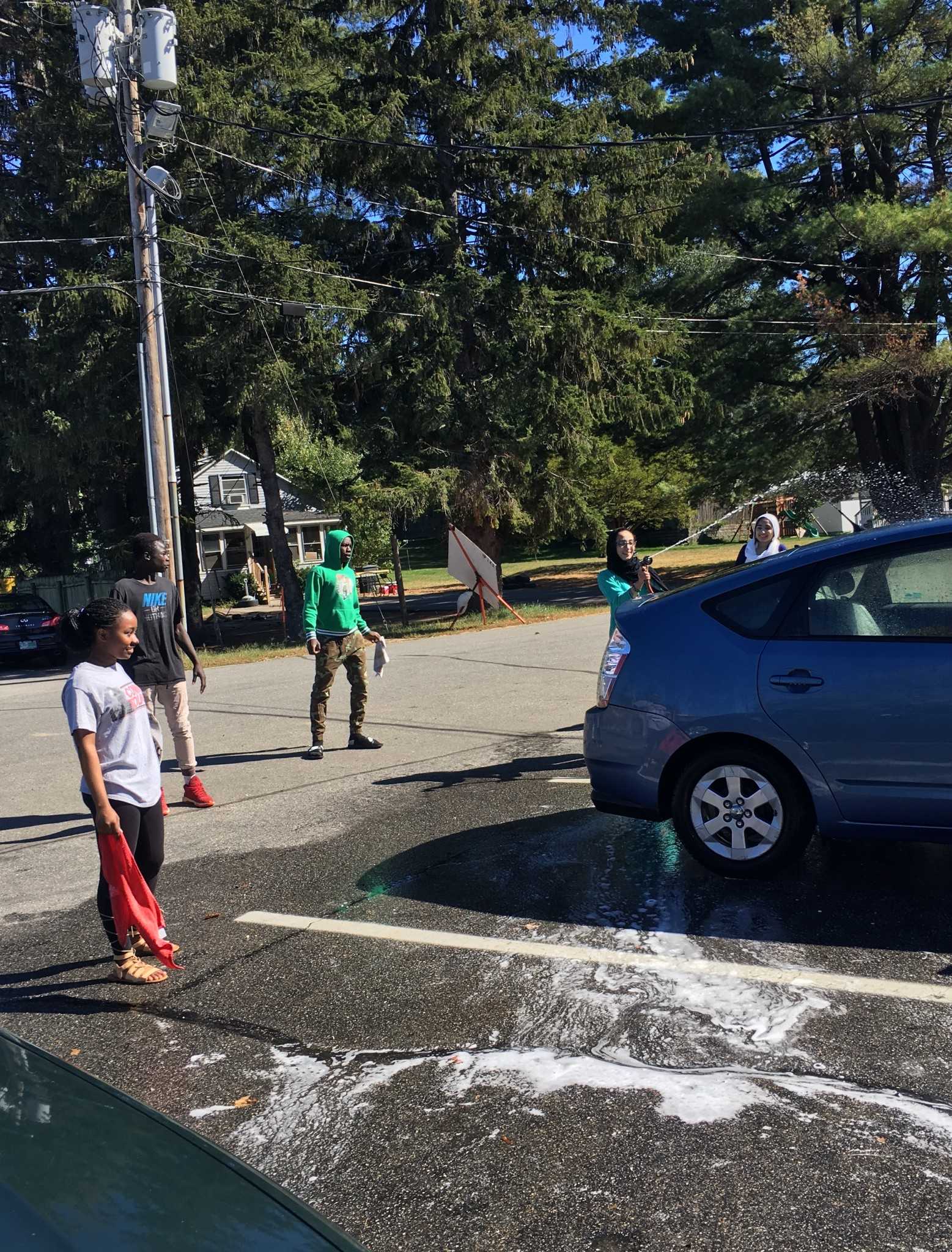 In the photo at left, Sana Khan, Hope Elonga, Abdulrahman, Alrashid Koko and Saeeda Khan worked together on one of the last cars of the day.
DiPasquale told every person who stopped by,  “You just got your car washed by an international group of students!”
The countries represented by student club members who worked the car wash included Pakistan, Sudan, Rwanda, Burundi, Congo and America.
Be the Change as a whole has around 60 members, making it one of the larger clubs at Concord High. These 60 students represent more than 25 different countries around the world.
Every Wednesday, pre-recorded ‘culture talks’ are aired on Concord Highs TV station, CHS Live. They consist of an interview of one or more students of various ethnicities and backgrounds about an aspect of culture, such as holiday tradition.
Culture talks are aimed at teaching the student body of Concord High about the diversity in their peers as an initiative to make the school a more welcoming and connected place. 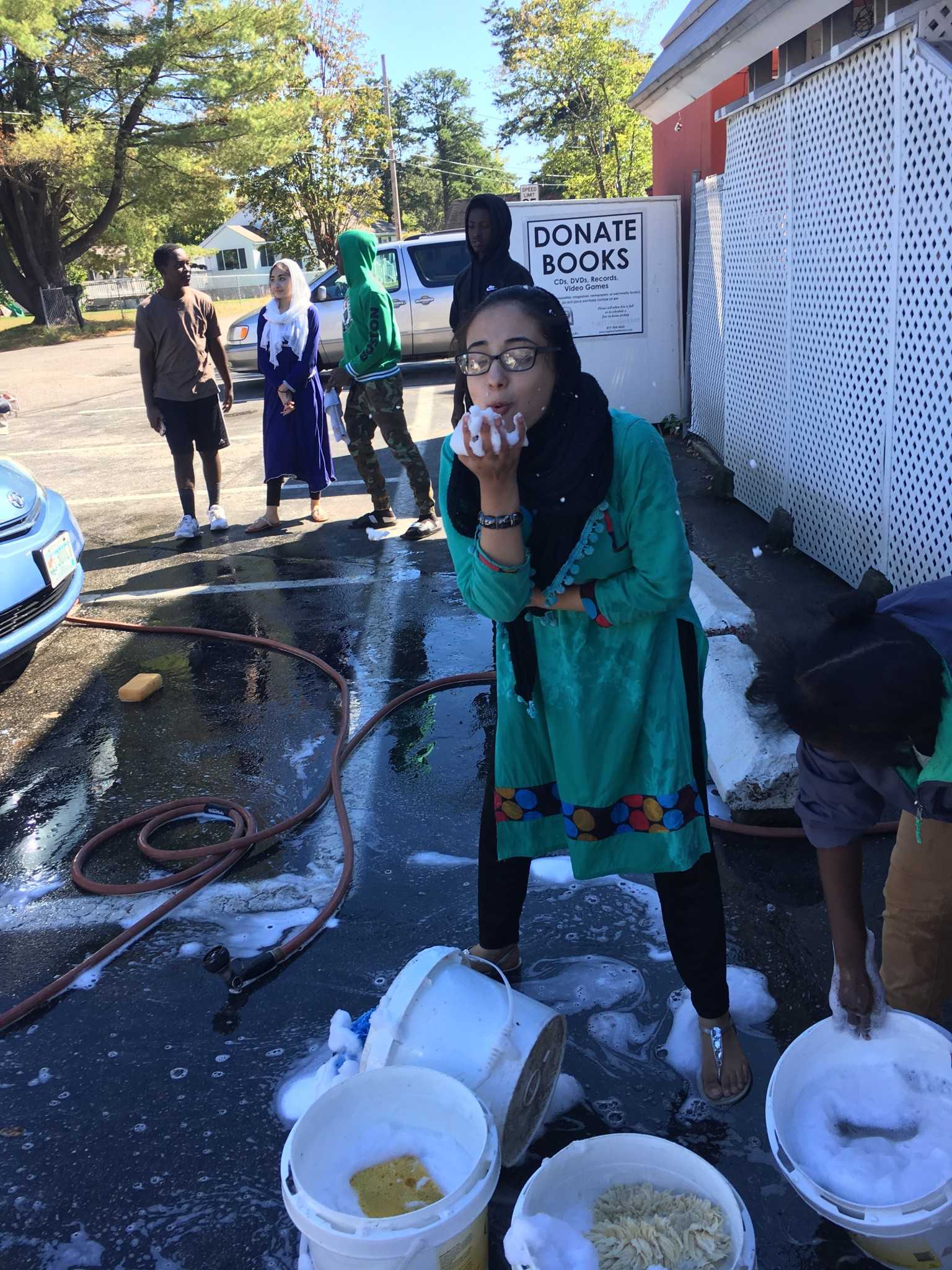 When it was time for clean up at the end of the four-hour car wash, Sana Khan had some fun blowing the bubbles left in the buckets.
Club members had lots of ideas for how the nearly $300 made on Sunday could be used.
Another one of Be the Change’s initiatives that is new this year is called the Compassionate Listening Project.
This involves training people to listen to others who may have differing opinions from their own in a respectful way, which will lead to more peaceful interaction among people of different opinion, background, and culture.
The Club will host a workshop at Concord High later this semester. The money raised at the carwash at Arnie’s will help support this event.