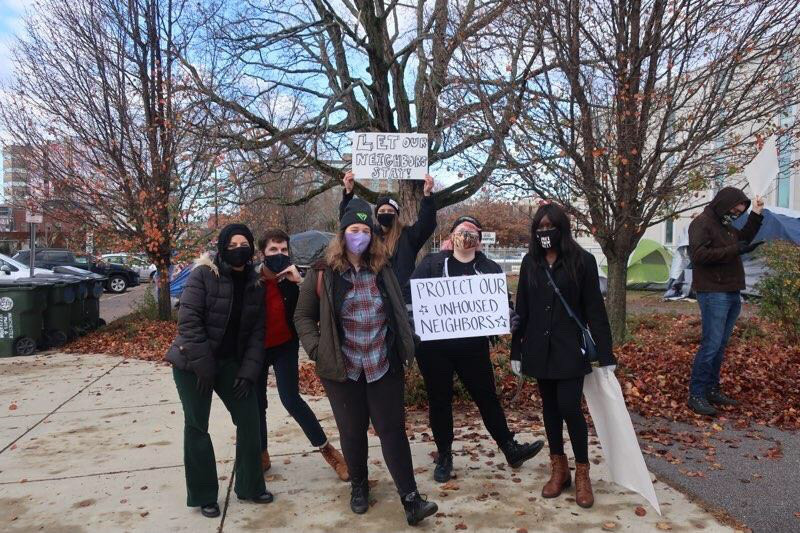 Community activists protested the evictions of a homeless encampment outside of the Hillsborough County courthouse in Manchester late in 2020.

During the COVID-19 pandemic, Granite Staters and Americans across the country have lost their jobs and been forced out of houses and apartments. The homeless encampment outside the courthouse told a chilling story of people left without adequate shelter in the face of a public health crisis.

On Nov. 6 the state government warned people in the homeless encampment that they had until Nov. 16 to vacate the area. Community activists and organizations immediately sprung into action and began protesting.

Residents and protestors managed to stand their ground for three days; however, on Nov. 20, dozens of state troopers entered the area and dismantled the encampment. In the process they destroyed people’s personal belongings and forcefully vacated those living outside the courthouse.

Destroyed belongings included donated winter jackets, hand warmers, tents and other necessities, according to activist Martin Toe, who was interviewed by phone.

While the state government promised to find alternative housing for displaced people, advocates say that so far it has not provided housing for all, leaving some in the cold throughout the winter.

“You go out there for an hour and you really start to feel it. Your toes are frozen and everything,” Toe said. “Our goal is to see nobody sleeping outside. Imagine the people who have to actually be out there.”

Sununu responded by giving the Council on Housing Stability until December to present preliminary plans and recommendations to address the housing crisis in the state.

While many activists hope that the sustained protests have called more attention to the issue, the path forward is still uncertain and many people will be left without houses amidst a pandemic and during a cold winter.

Lidia Aloyo Yen is the leader of Change for Concord, a progressive activist organization. Also interviewed by phone, she said, “Most people don’t choose to be homeless. Life circumstances can make you homeless in an instant. Don’t forget that everyone is human. Just because someone is homeless doesn’t mean that they deserve it.”