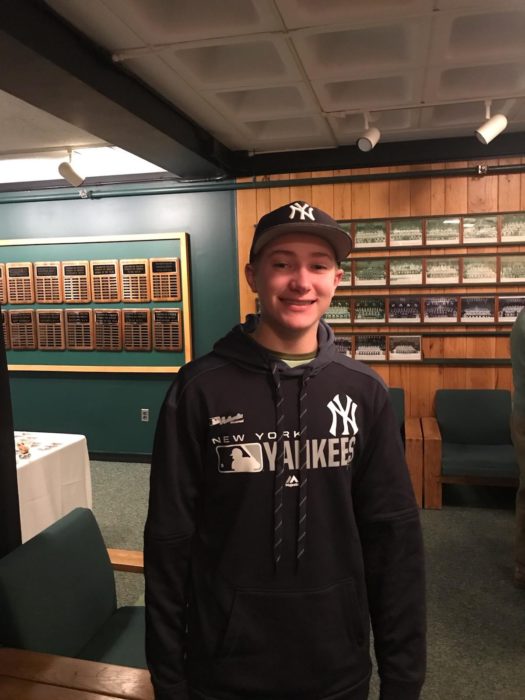 Prior to joining the Yankees he served as a minor league pitching coordinator for the Cleveland Indians. Before that, he attended the College of the Holy Cross where he received degrees with concentrations in psychology and philosophy, and played baseball.

When Blake attended Concord High School he played baseball for the Crimson Tide.

Thanks to Coach Blake’s link to CHS, I had a chance opportunity to ask him some questions.

What do you see as the biggest challenges on coaching on such a big scale as the Yankees?

“I think it’s learning to trust yourself and your instincts. They hired [me] because they think [I] have a skill set that fits the current problem and they are looking for a certain type of solution, so [I] have to try and be confident in that.”

“I think just learning the new parks, the new players, the new operations around major league travel–that’s obviously a different part of the job that maybe you don’t have an awareness for.”

Are you taking in the moment or taken by the moment?

“Early on I was just trying to wrap my head around what it was I was going to embark on. I was working in an office, and now I’m in the bright lights and the big crowds and the energy.”

Have you met all of the players, or at least the returning players, and gotten to know them and build relationships with them yet?

“That is the process that we are in right now. What their thoughts are [about the season ahead], and what they are trying to work on over the off season. As they start throwing more, I’ll visit them at their places before we meet in spring training.”

What baseball position did you play at Holy Cross?

“I was recruited as an outfielder AND a pitcher, and then being left handed, it just made more sense to go on the mound as I would get more opportunities as a pitcher.”

What is your favorite memory of playing high school ball in Concord?

“I think that we had some good moments when we won against Salem, and when we were a 13 seed and they were a 4 seed. I think that was the first time I had performed in an important game at that level. That is the one that stands out the most.”

Did you play all four years on the varsity team?

“I actually only played varsity during my junior and senior year. I played on JV freshman year, but then I broke my foot during sophomore year playing basketball, so I couldn’t try out that spring.”

Do you still connect with your teammates from those years?

“There is a strong baseball fabric in Concord and so it isn’t hard to stay in touch. And I would swing in for practices and off season workout and they were always very welcoming. It has always been fun to stay in touch with those guys.”

Can you think of anything about growing up in Concord and attending CHS that really helped you in your career?

If you could say anything to CHS who want to purse a career in athletics or coaching, what you be your advice?

“There is no one path to get there . . . Just keep your options open and don’t think there is one concrete path.”

When you were a Concord High student did you ever think that you would have internet notoriety, such as a Wikipedia page?

“No, definitely not. It was one of those things where you like the game, you hope you can play it at the professional level, and if it doesn’t work out, you’re not really sure there is another path. But, once you took it one step at a time, and opened the opportunities, and do a good job and people recommend you, then you get recognized and it just keeps building from there.”

How often do you get asked for tickets?

“Not a whole lot yet, but I’m sure it will pick up as the season gets closer.”

Could the Yankees have gotten you a better holiday gift than Gerrit Cole?

“No, that was awesome.  I was so excited when [Brian Cashman] called and told me it was done.  I am looking forward to working with him, and was really impressed in our meetings about his level of professionalism and his overall thought process to baseball.”

What are you looking forward to the most about this upcoming season?

“Just getting back on the field and competing with the players and the coaches for one common mission. This is what you dreamed about, and as it is coming back to fruition, you have to take in all in as you go.”

AUTHOR’S NOTE: Coach Blake was patient, kind and generous with his time.  Like others, he is helping to put CHS on the professional sports map on one of the biggest stages in the world.  As the Red Sox enter a rebuilding phase, and CHS students have a special link to a trending team, it may be the perfect time to switch your fandom.  Go Yankees!