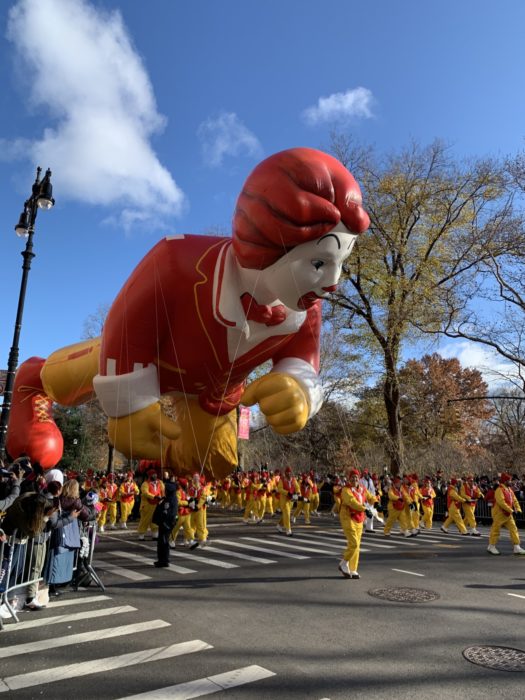 Thanksgiving is a time for seeing family, friends and taking a relaxing break from our sometimes stressful lives.

Some people travel to their relatives, while others stay home and host family and friends.  My family had the same expectations, visiting relatives in New York City, but this year we added a twist – attending the Macy’s Thanksgiving Day Parade.

The parade is the opposite of calm, relaxing and stress-free. It’s loud crowded, long and WONDERFUL.

Our hotel in Midtown was only two blocks from Central Park West, the longest strip of the 2.5-mile-long parade route, but, in order to get a good view, we had to wake early, and hit the streets by 6 a.m.  Then, we had to wait, wait and wait some more – three hours until parade time.

We stood on West 63rd Street and Central Park West, maybe fifteen blocks from the start of the parade.

Of course, the onlookers at the end of the parade, in front of Macy’s in Herald Square, had it tougher than we did, as they had to wait an extra hour and a half for the same fanfare to reach their location.

In all, sixteen giant balloons crossed by us, with another forty or more slightly smaller balloons, marching bands, dance troops, celebrity guests, clowns, and, of course, the sanitation employees that follow the mounted police.

The balloons were controlled by 1,600 Macy’s employees, who battled tough crosswinds along Central Park West, and who endured the cold temperatures of the early morning hours.

The parade began at the corner of West 77th and Central Park West, continued south to Columbus Circle on the southwest corner of Central Park, crossed to 6th Avenue, and continued down to Macy’s around 34th Street.

As mentioned, the parade route was about two and a half miles long, but every foot of sidewalk along the route was somebody’s prized viewing spot. It was truly incredible as an estimated 3.5 million people watch the parade in person, while an estimated 50 million watched live on television from homes.

The parade has become such a special part of Thanksgiving day all over the nation. It was something to experience that I will never forget.  It was great to have seen the 93rd Macy’s Thanksgiving Day Parade live, and for that I am thankful!

Next year, however, I am planning my return to the couch with a warm blanket . . .