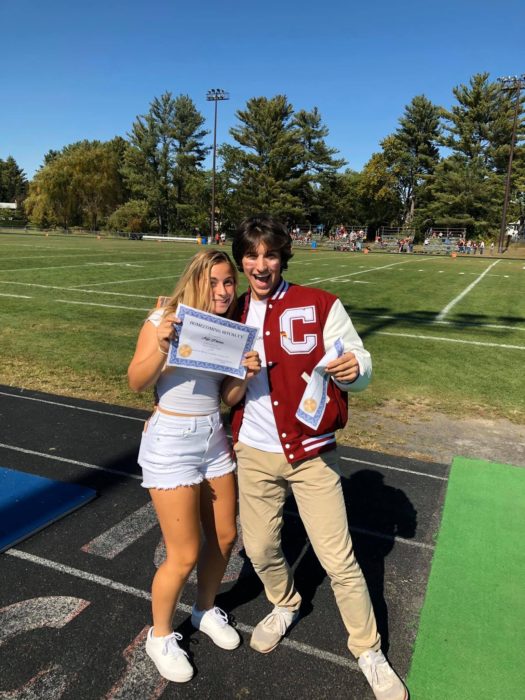 At Concord High School, homecoming is no humdrum event.

After a full Spirit Week and a pep rally Friday, students celebrated all day Saturday, Sept. 28, beginning with a short student-led parade led by the CHS marching band and ending with a dance.

In between was the football game at Memorial Field, where homecoming royalty Katherine Potter and Alec Galatis, both seniors, were awarded with certificates and cheering from the stands.

Potter and Galatis were not named queen and king. CHS decided to stray away from those titles, making the nominations purely about individuals themselves, after students a few years ago voted in a transgender peer as king.

“I was only a little taken back when people would call me the homecoming queen, only because I didn’t think with having homecoming royalty, instead of the king and queen, it would be addressed that way,” Potter said.

“I am very honored that I won…I hope the reason I won was because of my character and people find that I’m a nice person. I also feel like I’m very active with the school community so maybe people just knew my name if they weren’t sure who to vote for.”

Potter was placed in homecoming court to represent Key Club but she’s also active in National Honor Society and Varsity Club as well as being a member of the varsity soccer team.

Alec Galatis, nominated into the court from NHS (where he is also an officer), also wrestles and runs track with the Concord team, performs on CHS Live, and participates in the GAPP Program, Concord Connect (a mental health awareness club) and Varsity Club. Outside of school, he mentors a student and takes piano lessons.

“Homecoming court is such a great concept!” Galatis said. “It’s one of the things that helps to bond everyone in the student body together…I think my win came from an inner willingness to be kind to anyone as long as they’re kind to me.”

Both Galatis and Potter agreed: they would have been beyond excited for anybody to win, and the new term, royalty, has paved way for everyone to have a chance at a nomination and/or a win.

The next formal dance will be the senior prom set for mid-June.