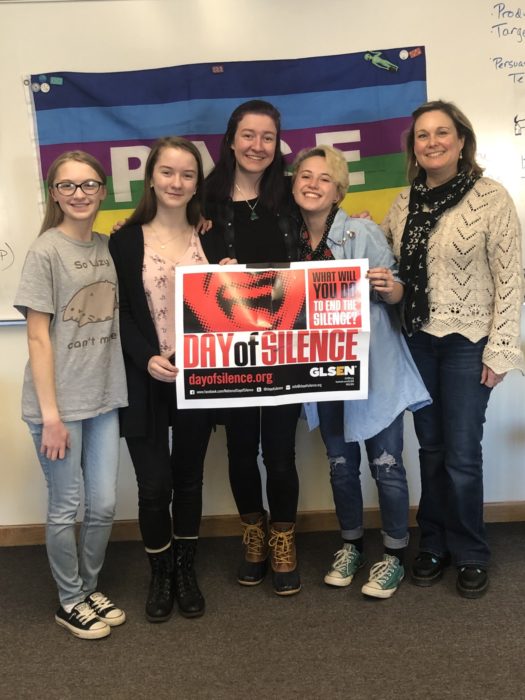 Participating students elect not to speak during the school day. They sign up and get a yellow ticket that becomes their nonverbal way of communicating that they are participating in the event.

A table will be set in the gym foyer two days prior to the event for signups.

Students vow silence to highlight the silencing of LGBTQ people. Throughout the day they remain silent and only communicate non-verbally. For example, some will carry a whiteboard to write answers on during class.

At the end of the day participants will meet at the granite steps and break their silence with a great big scream.

“The Day of Silence is symbolic because vocally you’re silent, but it kind of gives you space to realize a lot of time the being silent isn’t just vocally; it’s visually, expressively socially,” said Reign Saint.

She mentioned that it helps her know who is by her side. “It’s always really good to see who you wouldn’t expect to be doing it… to number one know that they’re a safe person to come out to, but number two to know…they’re allies.”

Students are advised to communicate to teachers their planned participation prior to Friday. This will allow teachers to make sure students are able to participate in class without breaking their silence.

“I had a teacher who was willing to work with me,” says Sydney Kilgore, who faced a Socratic Seminar on last year’s Day of Silence.

After their silence is broken, students will enjoy a pizza party and socialize with each other about their experience. Cool swag like stickers and tattoos sent by GLSEN will also be handed out for students to enjoy.

“It seems like a very small thing but it does get people’s attention,” says Piper Kilgore, president of Tide Pride.

GLSEN is a national organization that raises awareness of LGBTQ students in schools nationwide. It was founded in 1990 by a small but dedicated group of teachers in Massachusetts who came together to improve an education system for LGBTQ students who face bullying and discrimination.

“GLSEN is a national organization that works in creating safe schools K through 12 for LGBTQ and their allies,” said Heather Ouellette-Cygan, faculty advisor of Tide Pride.

GLSEN raises awareness through many different venues. The organization also does policy work where it advocates for laws and policies in place to protect LGBTQ students.