You ought to know: Jack Smith 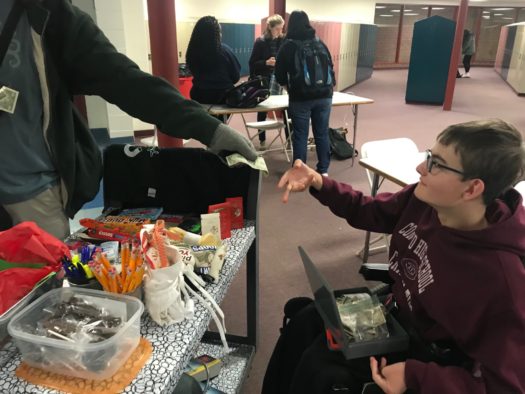 ▲
Jack collects money from a customer at his store
Lynn Reyes

▲
Jack collects money from a customer at his store
Lynn Reyes

Jack Smith is a student at Concord High School who has opened his own business, Jack’s This ‘n That. His store is set up in front of Commons D during period 2 on Fridays and is open to the CHS community.

Occasionally he travels to different commons as well.

He sells many things at his store, some of which are handmade by Smith himself. For example, Smith makes homemade soaps and sells them for $3 each.

“All of Jack’s items are either made by Jack or donated from other people,” said Lynn Reyes, an educational specialist who works with Smith. Pencils, sharpeners and snacks sell for 50 cents. His famous t-shirt, which says “chick magnet,” sells for $15.

When asked about interests outside his business, Smith said, “golf team” with a great big smile.

Smith loves golf so much that he formulated a special soap that smells like summer and fresh cut grass.

Not always being able to clearly communicate verbally, Smith uses technology to help communicate with  peers and customers. An app on his iPad matches items and prices. When asked for a price, Smith clicks a button.

“Jack uses his device and he keeps track of his items on his device for the prices,” said Reyes.

Smith said his biggest seller is Gatorade for $1.50.

Smith started his business three months ago as part of earning his school math credit.