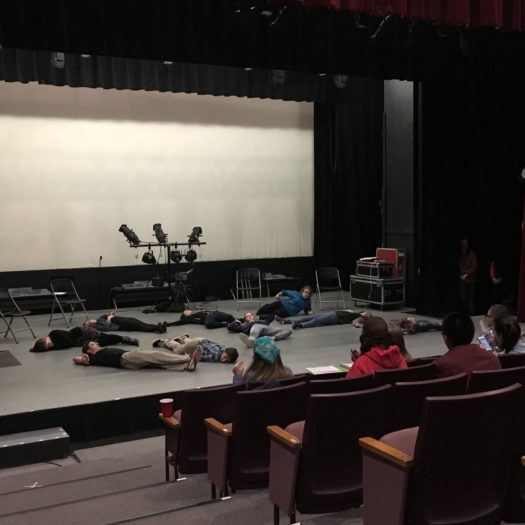 The Concord High School Drama Club is staging “The Complete Works of William Shakespeare (abridged) [revised]” Nov. 8, 9 and 10, at 7 p.m. in the CHS auditorium.

Tickets cost $10 at the door for adults and $8 for students and seniors.

“People always ask, ‘What Shakespeare show are you doing?’ and I say, ‘all of them’,” said Director Clint Klose. “All thirty-six plays that Shakespeare has written are incorporated into this some way throughout… we touch upon all of the shows, and sonnets, and everything else.”

This play was originally written by Adam Long, Daniel Singer, and Jess Winfield. It was first performed in 1987 at the Edinburgh Festival Fringe. Within this show, the shortest rendition of Hamlet is found. The show is about an hour and a half with an intermission.

“We wanted to find a way to introduce Shakespeare without being boring. We thought it would be a good show to be our first Shakespeare show with me here at Concord High,” said Klose.

The Drama Club has been rehearsing most days after school. Cast and crew have been working on the production since about September.

The cast in this play have all worked very hard to make this show something everyone will enjoy. Lauren Sawyer is the stage manager for this show and is excited to see it unfold. “Seeing it all coming together, hearing all of the laughs, it’s like, even if I’m not the one doing it, I know that I helped them do it,” she said.

“It’s very fun,” said Luongo. “I guess just having people come up to me afterward and saying how wonderful it was and how wonderful a job I did, and just even while I’m acting looking out and seeing people’s faces and just seeing how happy or sad or excited  they are that they’re here and that’s really like why I do it.”

Said Daniel Gaby, “I really like the energy you can get when you’re doing a show like this.”

This prop-heavy show has lots of things going on at once.

“You have never seen Shakespeare like this. It is just a whimsical, fast-paced, furied, funny all the way throughout the entire production,” said Klose.

Some sensitive material is included in the show, so come with an open frame of mind, advised senior Paula Arocena, who is working tech on this production. “Please come, and remember, it’s a comedy.”