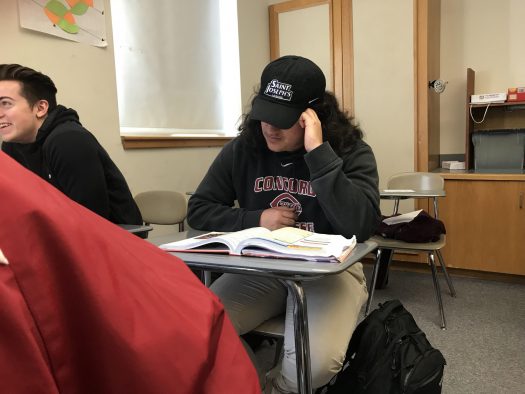 ▲
For athletes like Jack Diaz, concussion is a very real risk
Drew Livingston

▲
For athletes like Jack Diaz, concussion is a very real risk
Drew Livingston

The May 22 informational meeting scheduled for Concord High School students who want to play fall sports next year may bring thoughts of falling leaves and cool weather but for those interested in football or another contact sport, next season brings something else too: the risk of concussion.

More than a million U.S. teens play sports in which high-impact collisions at high rates of speed have led parents, scientists and doctors to question how safe they are in the middle of a game or match.

An 11-year study done by Sports Medicine Research Center found that football players are at the highest risk of head injuries, taking them out of the game.

The initial, nagging symptoms of a concussion (headache, confusion, dizziness, nausea and vomiting) are bad enough and can cause problems for athletes in class, but the real problem arises when long-term consequences for repeated blows to the head are looked at in further detail.

Repeated blows to the head and concussions can lead to early onset dementia, memory problems and depression, according to research done by the Alzheimer’s Association. Athletes who have experienced repeated blows to head can develop symptoms similar to those of Parkinson’s, a debilitating disease that makes everyday activities harder to complete and ultimately causes a person to need a nurse at their side at all times.

Although the spotlight is mainly on football, other contact sports also cause worry. There are approximately 3,000,000 concussions each year across all levels sports in people ages 15-24, putting head injuries neck and neck with car accidents.

Hockey and lacrosse have almost the same rate of concussions but these sports lack the popularity and numbers that football has, and thus generate fewer injuries overall.

People are looking for ways to decrease the number of injuries.

There is a new product that is in the testing phases in America but is already being sold in Canada that could significantly reduce the number of concussions in not only sports but the military as well.

The product is a plastic collar designed by Q30 Technologies that puts slight pressure on the jugular and can increase the fluid in the brain to prevent the brain from moving as much.

Scientists, doctors, and parents need to continue to raise awareness of the dangers of concussions to protect America’s youth athletes.

If scientists continue to research and come up with technology that might reduce impacts to the brain, contact sports like football and hockey can become safer and athletes can worry less about the nasty long-term side effects and focus more on their love of the game.