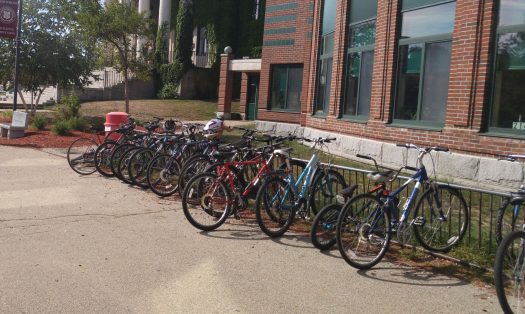 ▲
Some CHS students bike to school every day
Alychia Carbone

▲
Some CHS students bike to school every day
Alychia Carbone

People have choices. That’s the great thing about America. There’s always an opportunity to choose between things that we want.

Fast food or steakhouse? Candy or fruit? Many choices have healthy alternatives.

Humans can choose, for example, how they would like to travel. New and improved cars are coming out everyday. But why not use the bike that’s sitting in your garage?

Commuter bicycling is an effective way of transportation. Therefore, cities should embrace it.

Promoting bicycling across the globe would reduce the amount of motorized vehicles being used, thus reducing CO2 emissions. Global warming is a huge issue for our planet and encouraging civilians to bike would reduce air pollution to further benefit our environment.

According to the EPA, 200,000 early deaths occur every year in the United States because of air pollution.

A four-year-old bike sharing program out of Barcelona calculated to have reduced overall CO2 emissions by approximately 9 million kilograms annually. Advocating for bikes can not only help our planet but also save lives.

Bicycling rather than traveling via motorized vehicles also results in health benefits. This promotes physical activity for a healthier lifestyle and drops the annual rate of car crashes preventing 12.28 deaths per year.

To help make the idea of commuter bicycling possible, it would be important to invest in bike lanes. Although segregated bike lanes are expensive, they have the highest return on investments according to a program in Barcelona. Bike lanes would prevent cycle related injuries and keep a safe environment for cyclists.

We must all reach into our pockets and invest in a bike to not only lower global pollution but also to promote a healthy lifestyle.