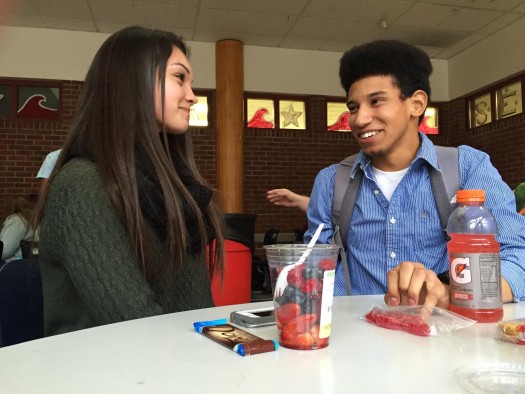 It’s Friday night, and you and your girlfriends decide to watch your high school’s hockey team take on another team. Bundled up in the rink, you notice that player number three is pretty cute. You’ve seen him a couple of times around school and you definitely want to get to know him. What do you do? Get his number from a friend and text him a romantic message: “Hey.”

“Hey.” Is that romantic or not?

Maybe not traditionally, yet our generation has grown fond of this casual approach to chatting up someone of the opposite sex. Sometimes the nonchalant, “Hey,” can lead to the daring: “Wanna chill?” Then begins “hanging out” with your person of interest, a practice less traditional than dating but one that has some benefits.

According to Urban Dictionary, “Hanging out” is defined as less serious than getting together or dating. Hanging out is perfect when you just want to get to know someone without neglecting your family and friends. It’s an informal way to see if you may want to date this person further down the road.

It also provides you with the opportunity to see a potential love interest in action, interacting with others,  including your friends, without anybody making any formal commitment.

But hanging out has disadvantages as well.

When going out for romantic dates doesn’t happen after time spent “hanging out,” you may get stuck in what is known as the friend zone. Relationships don’t grow and emotional connections are limited.

According to USA Today, a survey concluded that 57% of people between the ages of 18-24 think that texting has made it more difficult to determine whether an outing is an actual date. That lack of face-to-face contact can be limiting. If all you ever do is text player number three on the hockey team, it can be awkward to talk in person for the first time.

It’s important to not lose the romance of the date. Without the face-to-face interaction over a romantic dinner it is hard to really get to know and bond with a person.

People should bring back the face-to-face interaction of the ask and also the classy date itself.